Andreas Schelfhout belongs to the Romantic movement. His Dutch winter scenes and frozen canals with skaters were already famous during his lifetime. He became one of the most influential Dutch landscape artists of his century. He provided training to several painters who would become famous in their own right : Johan Hendrik Weissenbruch, Johan Jongkind (one of the forerunners of the Impressionists), Charles Leickert, Johannes Josephus Destree, Jan Willem van Borselen, Nicholas Roosenboom, Willem Troost, the American Hudson River School Painter Louis Rémy Mignot and his son-in-law Wijnand Nuyen. His death marked the end of the Romantic period in Holland. He is considered a precursor of the Hague School. His paintings are on display in several top museums :
Rijksmuseum, Amsterdam; Museum Boymans-van Beuningen, Rotterdam; National Gallery, London; The Wallace Collection, London 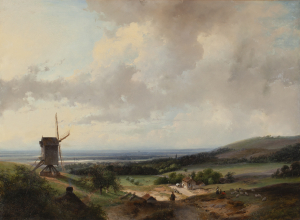 Summerlandscape with Haarlem in the distance 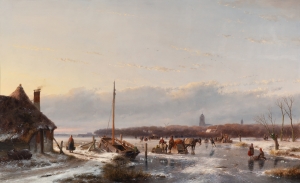