Pieter Florentius Nicolaas Jacobus Arntzenius (9 June 1864 – 16 February 1925) was a Dutch painter, water-colourist, illustrator and printmaker. He is considered a representative of the younger generation of the Hague School.
In 1882 he became a student of Frederik Nachtweh, under Nachtweh's supervision he gained admission to the Rijksacademie van Beeldende Kunsten. During his time at the Rijksacademie, from 1883 to 1888, his teachers included August Allebé and Barend Wijnveld, and amongst his fellow students were Isaac Israëls, George Breitner, Willem Witsen and Jan Veth. After his studies in Amsterdam he spent another two years at the Koninklijke Academie voor Schone Kunsten in Antwerp, studying under Charles Verlat.
Arntzenius was an accomplished artist. During his first years in The Hague, he painted landscapes in the typical Hague School style. Arntzenius later switched to mainly painting cityscapes and street scenes, just like Israëls and Breitner made in Amsterdam. Arntzenius' cityscapes were painted mainly in misty or rainy weather, he made use of these weather conditions to have his subjects be reflected on the wet asphalt. 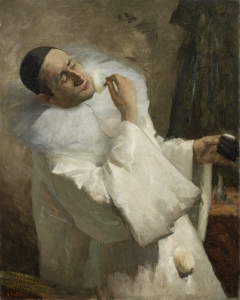 Portrait of a Pierrot (presumably Buziau) 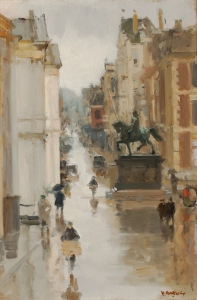 A view of the Noordeinde, The Hague