Floris Verster was a Dutch painter who grew up in an artistic family. His father painted birds and worked in the Natural History Museum in Leiden. his brother was an art critic and became a curator at Museum De Lakenhal in Leiden. Verster attended the Academy of Art in The Hague where he met his fellow students George Hendrik Breitner, Isaac Israëls and Willem de Zwart. Until about 1885 Verster painted Dutch landscapes with farms, sheds and bodies of water underneath a grey sky. His style was very much inspired by The Hague School. Later on he became friends with Jan Toorop who was a great source of inspiration to Verster. Verster was quite successful in his time and works were purchased by rich art collectors, such as Helene Kröller-Müller. Today, works of Verster can be found in the Kröller-Müller Museum, Otterloo, Museum De Lakenhal, Leiden, The Hague Museum, the Rijksmuseum, Amsterdam and more. 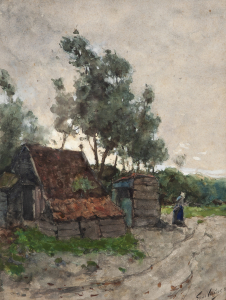 A farm on a countrylane