George Hendrik Breitner (12 September 1857 – 5 June 1923) was a Dutch painter and photographer. An important figure in Amsterdam Impressionism, he is noted especially for his paintings of street scenes and harbours in a realistic style. He painted en plein air, and became interested in photography as a means of documenting street life and atmospheric effects – rainy weather in particular – as reference materials for his paintings. From 1876–1880 he attended the Art Academy in The Hague where his extraordinary talent was rewarded on various occasions.

During 1880–1881 he worked at the famous Panorama Mesdag together with Hendrik Mesdag, S. Mesdag-van Houten, Theophile de Bock and Barend Blommers. In 1882 he met and worked together with Vincent van Gogh, with whom he often went sketching in the poorer areas of The Hague. Breitner preferred working-class models: labourers, servant girls and people from the lower class districts. Interest in the lot of the common people, which many artists felt in that period, was nurtured by the social conscience of French writers such as Émile Zola. 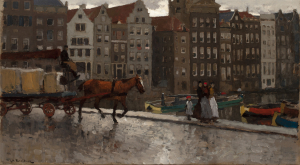