In 1892, at age 16, Kees van Dongen started his studies at the Royal Academy of Fine Arts in Rotterdam. During this period (1892–97), Van Dongen frequented the Red Quarter seaport area, where he drew scenes of sailors and prostitutes. He met Augusta Preitinger at the Academy, a fellow painter. In 1897, Van Dongen lived in Paris for several months, where there was a large emigre community. In December 1899 he returned from Rotterdam to Paris, where Preitinger had moved before him and found work. They married on 11 July 1901.


After the First World War, under the influence of his companion, the fashion director Lea Alvin (Jasmy Jacob), among others, van Dongen developed the lush colours of his Fauvist style. This earned him a solid reputation with the French bourgeoisie and upper class, where he was in demand for his portraits. As a fashionable portraitist, he was commissioned for subjects including Arletty, Louis Barthou, Sacha Guitry, Leopold III of Belgium, Anna de Noailles and Maurice Chevalier.

In 1926, he was made a Knight of the French Legion of Honour, and in 1927 the Order of the Crown of Belgium in recognition of his contributions to art. In 1929, the French government awarded him citizenship. Two of his works were collected that year by the Musée du Luxembourg. 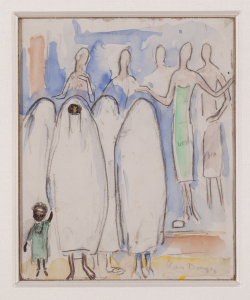