Pierre Eugène Montézin was born in 1874 in Paris. He inherited his inclination for nature from his father who was a lace artist, but also a lover of nature who took his son on expeditions to the country. These trips were to have a profound effect on Montézin’s later life and work.

Montézin apprenticed as a decorative painter before deciding to pursue a career in fine art. In 1893, he began submitting his paintings to the Paris Salon and he finally achieved this goal after a decade of failed attempts. From 1903 onward, the artist received ongoing recognition for his work, including medals in 1907 and 1910. After surviving his service during World War I, Montézin resumed painting and began again to exhibit. In 1932, he received the medal of honour from the Salon Artistes Français, which was exceptional since for three decades landscape paintings had been considered inferior. In 1932 the painters of the Salon unanimously elected Montézin president of the Salon jury. The same year he had a great exhibition in Paris that attracted many visitors. 237 canvases were shown, all landscapes, and similar successful exhibitions in Paris followed in 1936, 1938 and 1943. During his solo exhibition at the Galerie Durand-Ruel in 1938, the famous French critic Louis Vauxcelles (1870-1943) said about Montézin's work: "Each touch, each vibration weighs as a truth".

The artist died on July 10, 1946 in Moëlan-sur-Mer, France, while on a painting expedition in Brittany. He was found at the side of the road with a tube of paint and a few canvases. 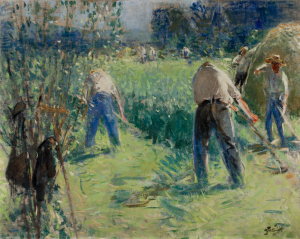