Salomon van Ruysdael (1600-1663) was born in Naarden as the son of a furniture and frame maker named Jacob de Goyer. Early in life Salomon and his brother Isaack moved to Haarlem and on the occasion changed their name to Ruysdael, a reference to an estate near Naarden where the de Goyer family had previously lived. Salomon spelled his name with an Y, Isaack his with an I. Isaack, though a good painter, is mainly recollected as the father of the innovative genius Jacob van Ruisdael. Salomon though is remembered as one of the great landscape painters of the Dutch golden age. 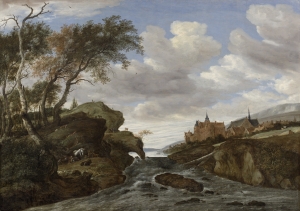