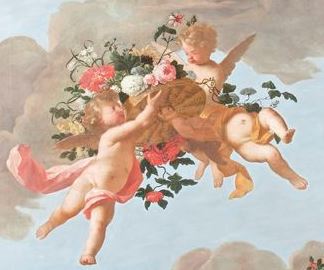 Ceiling painting with putti and flowers

This attractive circular ceiling painting shows a clouded sky with three putti , supporting a basket with flowers. The clouded sky is surrounded by a stone balustrade, consisting of four protruding parts, alternating rows of terra-coloured balusters. Above the balustrade a fourth putto can be seen. The baskets on the balustrade
contain various flowers like roses, peonies, garden anemones, marigold, amaranthus, hibiscus, poppies, nasturtium, chestnut and orange blossoms with oranges.

The ceiling painting is of the hand of The Hague painter Mattheus Terwesten. After his education Terwesten left for Rome, where he became a member of the Bentvueghels, with the name Eagle. The Bentvueghels (Dutch for “Birds of a Feather”) was a society of mostly Dutch and Flemish artists active in Rome from about
1620 till 1720. They are also known as the Schildersbent (“painters’ clique”). The members, who were painters, etchers, sculptors and poets, all lived in different parts of the city and gathered for social and intellectual reasons. Its members were amongst others Jan Asselyn, Jan van Bijlert (one of the founders), Jacob Jordaens,
Isaac de Moucheron, Jacob Toorenvliet and his brother Augustinus Terwesten with the name “Patrysvogel” (“Partridge”). The journey brought Mattheus Terwesten through Berlin, where his brother, Augustinus Terwesten (1649-1711), was successful as court painter of Frederik I of Prussia. Mattheus also painted some works here. After his return to The Hague in 1699 he became a sought-after painter of ceilings and other decorative works. According to the 18th-century artists biographer Johan van Gool there was ‘in den Haeg nauelyks een aenzienlyk huis, of het praelt met zyne Kunstwerken’, meaning that in almost every prominent house a painting by Mattheus Terwesten could be found. Of these paintings, only a handful has remained intact. For example the ceiling painting in Koepel van Fagel, found in the gardens of Palace Noordeinde; the painting in the old City Hall located at the Groenmarkt; and the one found in Huis Schuylenburch, currently the residence of the German ambassador.The success of Terwesten was not limited to The Hague only. He had commissions throughout The Netherlands.
The flowers and fruit in the painting are attributed to the Antwerp painter Gaspar Peeter Verbruggen II, who stayed in The Hague from 1706 till 1723. He became master of the Antwerp Guild of St. Luke in 1677, when he was only aged 13, and became its deacon in 1691. He worked frequently with Mattheus Terwesten. Verbruggen also painted the flower garlands in the earlier mentioned Koepel van Fagel.
Since the 17th century balustrades have been a frequently used motif in the Netherlands. In 1622 it was firstly used in ceiling paintings by the Utrecht painter Gerard van Honthorst (1592-1656), of which one is now on display in the Paul Getty Museum in Los Angeles.

In 1622 Van Honthorst had just returned from his journey to Italy, where he must have seen those balustrades. This motif quickly followed the example,
as can be seen in the Honselaersdijk palace in Naaldwijk. This palace was commissioned by stadtholder Frederik Hendrik in the 1630s. In the 19th century this palace was demolished, but thanks to the designs it is known that the great hall had a ceiling painting with a trompe l’oeil balustrade. The balustrade stayed in fashion till the first half of the 18th century, as this ceiling painting of Terwesten shows us. Till 1917 this ceiling painting hung in the inner chamber of the mansion Hooglandse Kerkgracht 22 in Leiden, the Netherlands. The painting was mounted in a stucco ceiling which was applied shortly after 1751, regarding its rococo style. In 1751 the house came into possession of Michiel van Bommel (1669-1763). Another ceiling painting by Terwesten, depicting Aurora, adorned the front room of the house. Since 1956 it can be found in one of the rooms of the Ontvangershuis of the Drents Museum Assen, the Netherlands. Because the flowers of the inner chamber ceiling painting are attributed to Caspar Peeter Verbruggen II, who stayed in The Hague till 1723 and passed away in 1730, this ceiling painting can be dated before the applied stucco ceiling. If the painting had already been mounted in Hooglandse Kerkgracht 22 before Michiel van Bommel moved in, is unknown. What is known, is that older ceiling paintings were often surrounded by contemporary stucco in the 18th century. For a long time Mattheus Terwesten was not identified as the artist
of the two ceiling paintings of Hooglandse Kerkgracht 22. In 1915 this ceiling painting was attributed to Jacob de Wit, and the ceiling painting with Aurora was attributed to Gerard de Lairesse (1640-1711). In 1917 the house came into possession of Constant Willem Lunsingh Scheurleer, then professor in Greek archeology in Leiden.
Almost immediately he removed the two paintings from the house, as it was said to, preserve them for posterity. Two years later the house was sold again. Before 1961-1962 the painting was acquired by Cornelis Johannes baron Schimmelpenninck van der Oye (1906-1987) as an anonymous work and was rolled up. Schimmelpenninck van der Oye was a stock broker and an art collector. The new owner had the ceiling painting restored by Pieter de Dood in Amsterdam, and finally had it hung in his study in his house Hofstetten in Ellecom, the Netherlands. 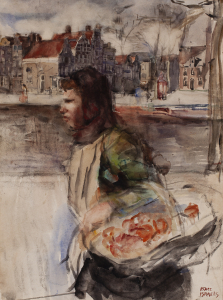 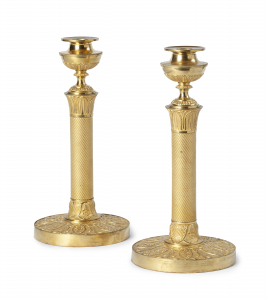 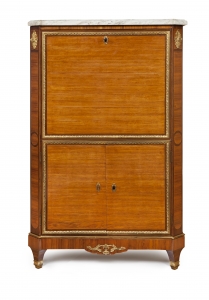