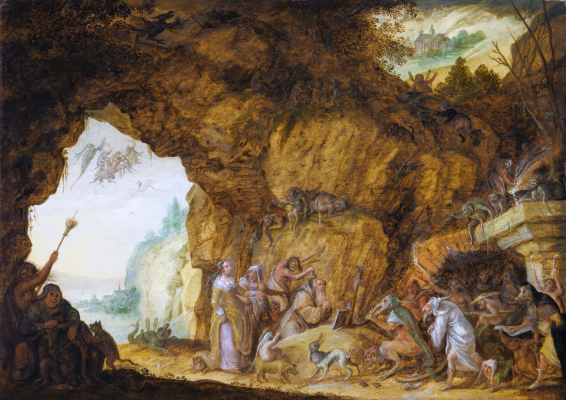 This painting depicts the Temptation of Saint Anthony. The saint is kneeling in a cave while surrounded by demonic creatures who taunt him and try to persuade him to live a life of sin. In the top right corner a church is burning; on the left a group of flying demons carrying the saint. Behind the saint stand a young woman and her chaperone, the woman presents Saint Anthony an ointment jar and therefore could represent Mary Magdalene. Saint Anthony does not let himself stray and keeps praying in front of the Bible and the crucifix.

The Alkmaar painter Claes van der Heck has painted various pictures with this subject. The element of Antonius who is lifted through the air by demons, seen here at the top left, was used in several of his paintings with this subject. He had borrowed it from a sixteenth-century print by master J. Kock.
The subject which was particularly popular in the Netherlands by Jeroen Bosch around 1500 has also been frequently depicted by painters such as Saftleven and Teniers in the seventeenth century.
Claes Jacobsz van der Heck was an Alkmaar master who was descended from Maerten van Heemskerck. He painted landscapes, history pieces and portraits for the local market.
In the first half of the seventeenth century he was the most important painter of Alkmaar.
Already in 1604 he is mentioned in the Schilder-boeck by Karel van Mander. Yet at some point there was confusion about his name. In older literature, much of his work was improperly assigned to his second cousin Claes Dircksz. van der Heck. That is why Wurzbach, and in consequence the cataloguer of the auction at Mak in 1927, used this name for this painting.

This painting was in St. Petersburg in the nineteenth century. Here it was owned by the curator of Dutch paintings from the Hermitage Andrei Somoff. This curator, who wrote a catalogue of the paintings in the Hermitage, had a small selection of paintings he privately owned. In 1897 Dr. Abraham Bredius visited him at home. According to his notes, he saw various paintings including a Temptation of Anthony by Claes Heck. After the death of Somoff in 1909, the painting came into the hands of the great collector Paul Delaroff. Delaroff bore the title of private adviser to His Excellency the Emperor of Russia and devoted a large part of his life to the study of paintings. As an amateur merchant he even traded on a large scale. His very extensive relationships enabled him to purchase well; they also enabled him to rekindle, among Russian amateurs, the interest in the Dutch school. His in-depth knowledge of the Dutch masters led him to be hired by Count Valentin Souboff to teach a course at his Art History Institute in St. Petersburg. At the time of his death in 1913, he owned around 2000 paintings, of which 500 from the Russian school. Several of his works were auctioned in Paris in 1914. This painting was probably auctioned in St Petersburg in February 1916. In 1920 it was owned by J. Bruinse in The Hague, who had the art historian Cornelis Hofstede de Groot look at it. This scholar wrote a certificate for the painting. This is evident from the description in the auction catalogue of Mak in Amsterdam where it occurs in 1927. A cutout from this catalogue is attached to the reverse of the painting. 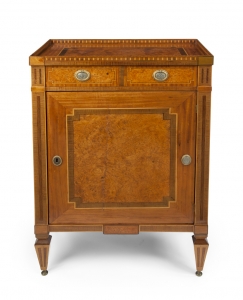 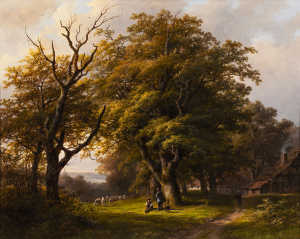 Rural landscape with a farm 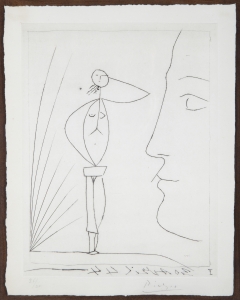