J.C.K. Klinkenberg was a nineteenth century painter who started his painting career as a student at the Academy of Fine Art in The Hague. Later he became a student of Louis Meijer (1809-1866), renowned for his seascapes. Finally, Klinkenberg studied under the tutelage of Christoffel Bisschop (1828-1904) where he developed his extraordinary talent for rendering light in paintings. Bisschop was a painter of genre pieces and interiors, but Klinkenberg chose a different route: the one of cityscapes. Klinkenberg was mainly active in The Hague and Amsterdam, but visited other cities as well. Countless Dutch cities were immortalised by him. The cityscapes of Klinkenberg are well known, mainly because of his use of colours and dazzling light. Klinkenberg’s works are bright and atmospherically pleasing. 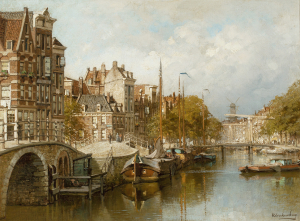 View on the Brouwersgracht from the Papiermolensluis, Amsterdam