Marius Alexander Jacques Bauer (25 January 1867 – 18 July 1932) was a Dutch painter, etcher and lithographer, best known for his Oriental scenes. His style was largely Impressionistic, although it also derived to some extent from the Hague School.

In the period between 1880 and 1930 many Dutch painters sought inspiration abroad. Some artists travelled very far to the Orient to capture it’s exotic life. The most pronounced orientalist of the Netherlands is Marius Bauer. His reputation is based almost exclusively on oriental depictions.

Bauer was a true adventurer. “It cannot be too ‘far away’ for my taste! And the stranger and more wondrous everything is, the more I enjoy it,” he wrote to his friend, journalist Maurits Wagenvoort.

In 1888 he was given the opportunity to make his first trip east, to Istanbul, by the art dealer E.J. van Wisselingh and decided to make Orientalism his principal subject. Bauer as being a inveterate traveller, went off to India, Indonesia, Turkey, Palestine and Morocco among other destinations.

Among the cities he visited were Cairo, Luxor, Jerusalem, Agra and Benares. Places he immediately associated with the stories of One Thousand and One Nights. He was irresistibly drawn to street life, the colorful populace and the exotic landscape of parts of the world that were then unfamiliar to most people.

Bauer made sketches and drawings on location and later developed those into etchings, watercolours and paintings with his characteristic, impressionistic stroke. 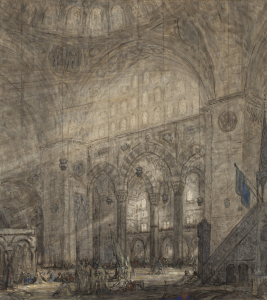