Pavel Akimovich Ovchinnikov‘s life was a success story. Despite the fact that he was born into a rather humble family, living in the Moscow area, Prince Dimitri Volkonski, who sent him as an apprentice to a Moscow jewellery shop, provided him the opportunity to broaden his horizons.
In 1853 he founded his own workshop, which developed into a factory with more than a hundred employees, specializing in gold, silver, enamel and jewels. In 1865 he was appointed Court supplier to the future Zsar Alexander III and he won the gold medal at the Pan-Russian manufacturing exhibition that same year. In 1867 he participated in the Exposition Universelle in Paris. A few years later he was appointed Court supplier to the Italian Court of King Vittorio Emanuelle II and to the Danish Court of King Christian IX.

In 1873 Ovchinnikov expanded his business to St Petersburg and the number of employees increased to over three hundred by 1881. One of his major accomplishments was the opening of an educational centre in his Moscow factory, where future artists and craftsmen were trained in drawing techniques and modelling. The Ovchinnikov firm was renowned for its enamel works throughout Europe, mastering different processing techniques, such as cloisonné, champlevé and on watermark. After Pavel Ovchinnikov’s death in 1888 his four sons took over the company. In 1917 the trading stopped due to the outbreak of the Russian Revolution. Nowadays, Ovchinnikov objects are on display in leading international museums and are part of royal collections. 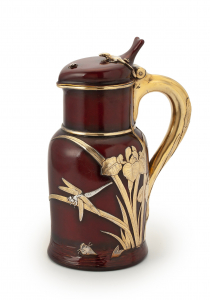